As a family, we’ve been visiting Southwold for many years – used to have a tradition of driving up there on New Years Day, taking in Walberswick and Snape Maltings on the way back, but too many freezing, windy ‘wash-out’ trips where no one wanted to get out of the car, put a stop to that tradition. 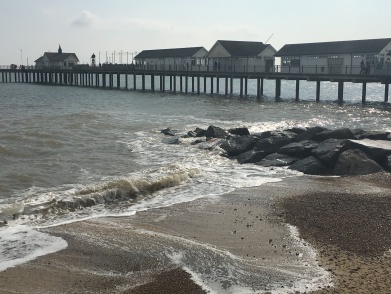 I braved the weather last November because I knew I wanted a picture of Southwold Pier on the cover of my book. The brilliant cover designer Berni Stevens managed to make it look pretty and not so wintry so that my cover looked as if it was just made for summer reading! Coincidently there was a rather handsome man having photographs taken against the groynes – with a guitar slung over his back! It would have been perfect, except that my daughter more or less threatened me with a fate worse than death, if I approached him to see if I could take some photos. Such a shame as I’m sure The Fates had put him there just for me.

The little brass plates that are set all along the balustrade on the pier, where loved ones can be remembered or special occasions recorded, made me realise that Southwold would be the perfect setting for my lovely Dylan and Scarlett to fall in love (yes, she was lovely by the end of the book!) You can just see them, in the bottom corner – the brass plaques not Scarlett and Dylan! 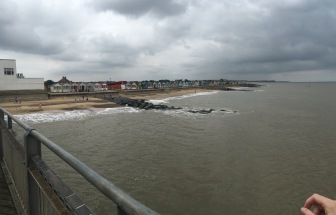 and the fearsome prisoner, Crankenstein who roars and bares his teeth! 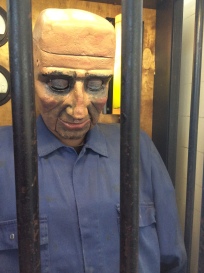 These were videos but they don’t appear to be working so if you really want to see Crankenstein and his friends, here’s a link. http://www.underthepier.com/

My dream, even before I became a ‘proper’ writer was to own one of the beach huts along Southwold seafront until I discovered how horrendously expensive they were. I even decided I’d call it Dormouse House (my nickname, when I was little, was Dormouse) – but then if PDJames could buy one, I don’t see why I can’t! #reachfor the sky 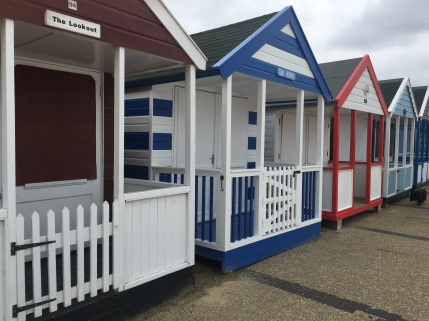 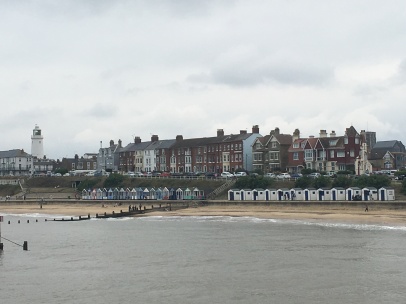 Ooh look, there’s me waving from my very own beach hut! One day indeed!

I write heart-warming contemporary romcoms and historical women’s fiction that is always guaranteed a happy ever after. From spending many years as an air-stewardess and seeing that it really is love that makes the world go around, I determined to put the same sparkle and emotion into my stories. My life is no longer as exotic (or chaotic) as it was in those heady days of flying around the world as I live a quiet life in Hertfordshire with my beautiful family and two pesky cats. Air Guitar and Caviar and The Magic of Stars are airline based novels and Christmas Kisses on Hollywell Hill is a stand-alone feel-good Christmas romance set in St Albans. The Potter's Daughter was published by Choc Lit/Ruby Fiction in February 2019 and Happy Christmas Eve was published Christmas 2019 by Ruby fiction/ Choc Lit.
View all posts by Jackie Ladbury →
This entry was posted in Uncategorized and tagged Air Guitar and Caviar, Amazon, ebook, happy, love, reading, romance, romance novel, seaside, Southwold, summer. Bookmark the permalink.