Didn’t we have a lovely time?

Met up with some of the lovely Write Romantics for a weekend of serious writing talk and unusually (for me, anyway!) not much serious drinking, although Jo cracked open a bottle of Lanson champagne to celebrate us getting together. 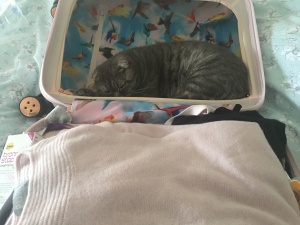 Cats and suitcases- what is it with them?

‘Little cat’ decided to do what she always does when I get out my suitcase, so I was in danger of being late as didn’t have the heart to move her! Bless! 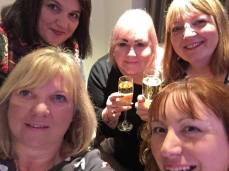 Had such a great time in Derby meeting Sharon Booth for the first time and catching up with Helen Phifer who drove down from Barrow-in Furness, Jo Bartlett who drove up from Kent, and Jessica Redland who came down from Scarborough, picking up Sharon on the way.

Sharon knew all about Bonny Prince Charlie reaching Derby in his quest to conquer England before deciding it wasn’t worth the bother (or something ike that!) Here he is, sitting on his horse, looking decidely camp and a bit like he’s sucking a lemon!

We went to the book cafe which we thought was rather splendid and we wished there were more of them in England, and then went to a shop that sold Charlie Bears as Julie (Jessica) collects bears, but at £200 each they were a bit on the expensive side, although they are absolutely gorgeous and very tempting. We rounded off the weekend by going to see Paddington 2 at the cinema which was fabulous – especially the end bit where Hugh Grant dances in a pink outfit!

Oh, and I made a very new friend who I think might become an important part of my life. She’s called Raspberry Ripple Pom–pom (I kid you not!) and she jumped into my shopping basket when I wasn’t looking!

Raspberry Pom-pom, I love you already.

I write heart-warming contemporary romcoms and historical women’s fiction that is always guaranteed a happy ever after. From spending many years as an air-stewardess and seeing that it really is love that makes the world go around, I determined to put the same sparkle and emotion into my stories. My life is no longer as exotic (or chaotic) as it was in those heady days of flying around the world as I live a quiet life in Hertfordshire with my beautiful family and two pesky cats. Air Guitar and Caviar and The Magic of Stars are airline based novels and Christmas Kisses on Hollywell Hill is a stand-alone feel-good Christmas romance set in St Albans. The Potter's Daughter was published by Choc Lit/Ruby Fiction in February 2019 and Happy Christmas Eve was published Christmas 2019 by Ruby fiction/ Choc Lit.
View all posts by Jackie Ladbury →
This entry was posted in Uncategorized and tagged Bonnie Prince Charlie, Book cafe, Derby, Hugh Grant, Jellycat, life, Paddington, Raspberry pompom, Write Romantics. Bookmark the permalink.

4 Responses to Didn’t we have a lovely time?